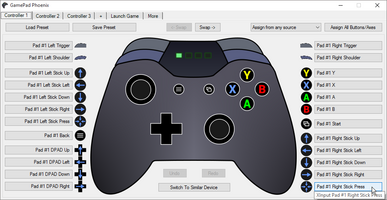 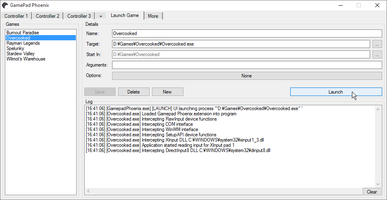 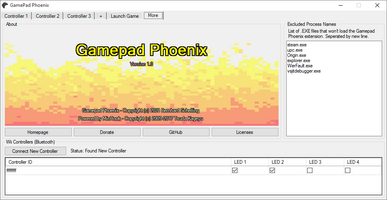 A few weeks ago I released the first public beta version of a new controller emulator tool for Windows, and since updated it twice.
It's called Gamepad Phoenix and its mission is to play any game (old or new) with any gamepad (old or new).
This is somewhat similar to x360ce however Gamepad Phoenix emulates not only XInput but also DirectInput and WinMM APIs, thus supporting a wider range of games. On top of that, the user interface is kept simple and snappy.

A bit of back story. About half a year ago I finally got fed up with the tools I kept trying to use to get a bunch of controllers working in various couch co-op games. It felt like every time I wanted to play something with the family I spent up to an hour tinkering with x360ce old and new, XOutput, XInput Plus, Xidi etc. And the cluttered UIs and drivers and manual DLL copying was always frustrating to me.
I thought to myself, there's got to be a better way!

So I started working on this tool and one by one got the games working that we wanted to play. Overcooked, Rayman Legends, Spelunky, Hammerwatch, to name a few. The tool now supports not only XInput and DirectInput controllers but also Wii Remote Controllers (Classic Controller or SNES Classic Mini controllers are great). Later in development I tested a broader spectrum of old and new games.

Current version is 0.9.2 and I call it a beta because I don't own that many games and I'm pretty sure there's plenty of games out there which use some obscure method to access joysticks.

The tool is available here on itch.io. It's also open source so there's a GitHub repository as well.

Feedback of any kind is very welcome! If you have any issues, try to be constructive and as technical as possible. Also if I don't own the game (and there is no free demo) I might not be able to help.