A downloadable tool for Windows

Gamepad Phoenix is a tool for Windows to play any game (old or new) with any gamepad (old or new).

To map an entire emulated controller, just click the "Assign All Buttons/Axes" button in the top-right of the window and press the buttons and stick directions in order as prompted. If a button or axis is not available on the real controller, you can click the "Clear" button to skip assignment.
Individual parts of the gamepad can be remapped by clicking them either on the graphic in the center or by clicking a specific part in the lists on the sides of the window.

You can load and save controller mapping presets using the two buttons in the top-left of the window.

While loading a preset, if you press L1 on a controller and a matching preset exists, it will be loaded automatically.

On the "Launch Game" tab, press "New" to create a new game launch configuration. Next, click "Select Game EXE" to browse for the executable of the game to launch through Gamepad Phoenix.
Selecting the game .EXE will automatically fill out the fields 'Name', 'Target' and 'Start In'. You can modify them afterwards as needed and define optional launch command line arguments as well.

The games list can be re-ordered by dragging items with the mouse.

The following per-game options can be toggled by clicking on the Options box in the game details.

The game option 'Use Indirect Loading' can be required for some games that refuse to run directly by launching the .EXE file.
Things like launchers, updaters or game stores can make the direct loading method not work.
Check the log view below the game details for how a game behaves when launched and try this option when the gamepad emulation does not work.

When enabled, two additional buttons "Prepare" and "Restore" will appear next to the "Launch" button.
Use the "Prepare" button to analyze the game and setup an appropriate redirector DLL automatically.

After preparing, the game can be launched through the tool or directly through its launcher or store.

Buttons and axes from the main controller and extensions can be mapped. Motion controls are not supported. Supported extensions are Classic Controller (including Pro and NES/SNES Classic Mini variants), Nunchuk and the WiiU Pro Controller.

To connect to a controller, make sure the PC has a Bluetooth module installed (can be either built-in or a USB dongle). Then switch to the "More" tab in Gamepad Phoenix and click the "Connect New Controller" in the "Wii Controllers" section.

Next, press the red SYNC button behind the battery cover of the Wii Remote Controller. After a few seconds, the status info text should switch from "Searching For Wii Controller" to "Registering HID Service" and finally to "Found New Controller".

Once the controller has been connected, the LEDs pattern can be set with the four checkboxes in the Wii Controller list. The buttons and axes can be mapped to any of the gamepads in the "Controller" tabs like a regular controller.

The controller will not be paired to the PC and needs to be connected again once the it loses power or the sync button gets pressed.

The tool itself can be navigated with the mapped controllers.

These features are not yet implemented but hopefully will be some day. 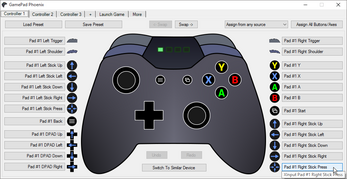 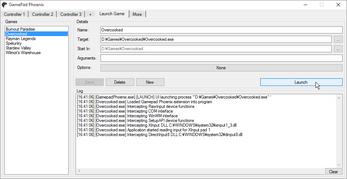 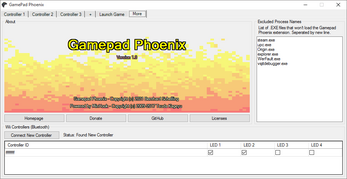